The Triumphant Entry of Christ 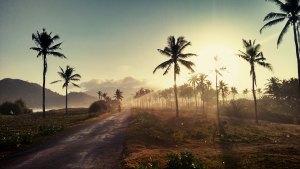 Matthew 21:8-11 And a very great multitude spread their clothes on the road; others cut down branches from the trees and spread them on the road. 9 Then the multitudes who went before and those who followed cried out, saying: “Hosanna to the Son of David! ‘ Blessed is He who comes in the name of the LORD!’[a]
Hosanna in the highest!” 10 And when He had come into Jerusalem, all the city was moved, saying, “Who is this?”
11 So the multitudes said, “This is Jesus, the prophet from Nazareth of Galilee.”

In Matthew’s description of Christ’s triumphal  entry he tells us that “a very great multitude spread their garments in the way”.  I was recently reading a book that caused me to rethink that great procession we know as “Palm Sunday”.  The book is The Life of Jesus Christ by James Stalker.   He claims that 2-3 million visitors had made the pilgrimage to Jerusalem that Passover.  That is a shocking number of people. Could it be possible that the Lord brought such a large population to Jerusalem that weekend because of the events that were to occur that particular weekend?  Could it be that there was a sovereign plan connected to the crucifixion and resurrection of our Lord?

The stories of Christ’s miracles had spread far and wide over the past three years.  Every Jewish person scattered all over that region of the world had heard of the miracles and the teachings of Christ.  They wondered, could this be the promised messiah?  Could this be the savior of the world?  They all came with hopes of seeing a miracle, or hearing one of His famous teachings.  There was an expectancy and excitement as hundreds of thousands poured into Jerusalem.

Rejoice greatly, O daughter of Zion; shout, O daughter of Jerusalem: behold thy King cometh unto thee:  He is just, and having salvation; lowly, and riding upon an ass, and upon a colt the foal of an ass.”

As Jesus came into Jerusalem, the crowds were shouting with excitement. Their time had finally come.  Their king was taking His Throne.  They had no idea of the plan of God. Within a few days there was a betrayal, a denial, a trial, and a crucifixion. Their messiah was publicly executed.  They experienced catastrophic earthquakes and supernatural darkness as Christ hung on the cross. Then after three days, there were rumors of a resurrection.  What an incredible time to be in Jerusalem.  The most important event in history, the death and resurrection of Christ had come, and the expanded population of Jerusalem for this Passover had been effected permanently by these events.

The Second coming of the Lord will also come suddenly and unexpectedly. Paul said Jesus would come like a “thief in the night”.  The events taking place in our world are sign posts on the way to the second coming.  Every earthquake, every tsunami, every hurricane, every catastrophic act of terrorism, all of these things are just signs of the Return of Christ.

I believe God has a supernatural last day plan for the city of New Orleans. Our city is known historically for its sinful reputation. People from the world come here and do things they would never do anywhere else. Paul said, “Where sin abounds, grace does much more abound”.  There is a time of reciprocity coming from the Lord. There is an outpouring of God’s overflowing abundant grace coming to New Orleans as a sign to the nation. Jesus is coming back. I believe the crowds will gather as they did at His first coming, just wanting to see or hear a glimpse of Christ for themselves.

The crowds at that first Palm Sunday were looking for a messiah who would fix their earthly problems.  They did not understand His miracles or why He came. But in their ignorance they witnessed something greater that anything they hoped for.  They were there for the cross and the resurrection of our Lord.   Maybe your curiosity for the supernatural and a solution to your earthly problems may draw you to take a look at our Lord Jesus. As you draw close, you may be surprised at the sound of the pounding nails, astounded by the empty tomb.  Then you will see that Christ has a plan for you far bigger and better than just fixing your problems.  He has a new life for you that begins now and continues forever.