The Battle is the Lord’s 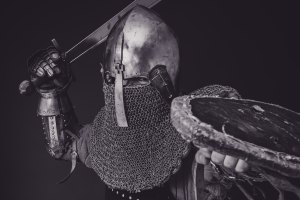 20 And they rose early in the morning and went out into the wilderness of Tekoa. And when they went out, Jehoshaphat stood and said, “Hear me, Judah and inhabitants of Jerusalem! Believe in the Lord your God, and you will be established; believe his prophets, and you will succeed.” 21 And when he had taken counsel with the people, he appointed those who were to sing to the Lord and praise him in the beauty of holiness, as they went before the army, and say,
“Give thanks to the Lord,
for his steadfast love endures forever.”
22 And when they began to sing and praise, the Lord set an ambush against the men of Ammon, Moab, and Mount Seir, who had come against Judah, so that they were routed.

This is one of the most unusual stories in the Bible. Judah was being attacked by an army far more powerful than they were. There was no chance for Judah to defend against the invading army. Their country and their lives were all in jeopardy. King Jehoshaphat began to call out to the Lord. The Lord gave Him the most unusual command, send out the singers in front of the army. Jehoshaphat followed the instructions and the singers began to sing, “give thanks to the Lord for He is good, and His mercy endures forever”. The enemy began to respond in fear, and turned on themselves. A great victory was won that day. Maybe you are facing impossible circumstances in your life, if so, it is time to worship. Turn your attention off of your need and look to Jesus. In His Presence is fullness of joy. As we worship the Lord many things begin to happen. Our attention is turned off of our circumstance, and onto the Lord. This is where supernatural faith begins to operate. Today, send out your worship to meet your problems, you need not fight in this battle, the battle is the Lord’s.