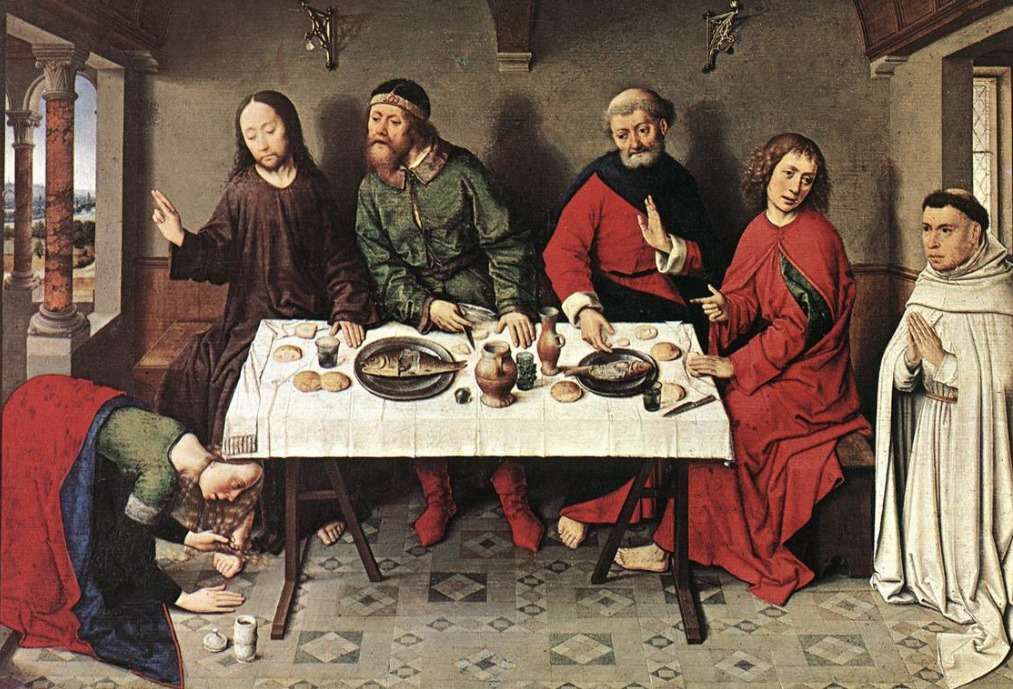 “When one of the Pharisees invited Jesus to have dinner with him, he went to the Pharisee’s house and reclined at the table. A woman in that town who lived a sinful life learned that Jesus was eating at the Pharisee’s house, so she came there with an alabaster jar of perfume.  As she stood behind him at his feet weeping, she began to wet his feet with her tears. Then she wiped them with her hair, kissed them and poured perfume on them.” Luke 7:37

What a picture of redemption! It shows how much our emotions are to overflow toward our Savior! When He walks into the room do we treat him as ordinary? Or even better when our brothers and sisters come for a visit! My oh my how many times did I turn my head away! Some historians say that this woman was no stranger in this Pharisees house. We of course don’t know but everyone seems to know what her occupation was! It was also indicated that she had an encounter with Jesus earlier and came to this house to give thanks. Whatever the case is, her encounter was timely and newsworthy. Her life was turned upside down and instead of using her precious oil on men, she poured out her life onto Christ. All the feelings inside of her became white as fullers soap and she knew the old ways were finished. Her repentance filled the washbowl and poured over! The same hair that she used on others she used for the Son of God. The Pharisee on the other hand showed no common courtesy to Christ because he thought he was just another fixture in the room. In fact it sounds like he didn’t show any attention to Jesus at all. But this woman begin to cry and cry and kiss his feet over and again using her hair as a towel and wiping away the oil and the tears. We will call them heart tears! What a spectacle she must have been in the room! To those that know where they have been and know where they are, they have no trouble being a spectacle all the days of their lives. The alabaster box of devotion breaks out in all of us. We give him back what was meant for him in the first place. We can never diminish the guilt of sin and the amount of grace that it took to free us from it!

Christ turns to the annoyed Pharisee and demands him to “look at the woman”! Christ chides him by saying, ‘You gave Me no water for My feet; but she has washed my feet with tears, and wiped them with the hairs of her head.'” What a changing of places there is now! The Lord has made the first to be last and the last to be first! Simon the Pharisee thought himself far more advanced than this woman. Where are your heart tears?